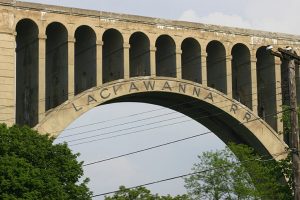 The small borough of Nicholson, Pennsylvania, got national attention in 1986 after a Bengal tiger was spotted in the area. Despite a long search by state police and zoo officials, the tiger was never found. Nicholson is also famous for the Tunkhannock Viaduct, more commonly referred to as the Nicholson Bridge. Built by the Delaware, Lackawanna & Western Railroad between 1912 and 1915, the bridge has changed many owners since its completion. Every day trains travel the bridge going New York or other rail yards throughout the state. The borough holds a festival in honor of the bridge every year called Nicholson Bridge Day.

When choosing a law firm, you want one with a successful track record as well as the respect of its peers. At Munley Law, our prestigious honors speak for us. Our lawyers are members of the Million Dollar and Multi-Million Dollar Advocates Forums, have been named Pennsylvania Super Lawyers, and are listed as one of the Best Law Firms by the U.S. News and World Report. In addition, our lawyers are frequent speakers on several legal matters throughout the United States.

If you were injured in an accident caused by someone’s negligence, get the legal help that you deserve. Contact the Nicholson personal injury lawyers at Munley Law for a free consultation.

I have worked with Chris, and Munley Law, for many years and recommend and endorse him highly. Chris, his firm, and his family, are extremely reputable and knowledgeable Personal Injury Attorneys with excellent character. Their civil litigation experience is exemplary and I will continue to utilize them as referral attorneys whenever possible. Philip Deberard, Personal Injury Lawyer

Marion is a tremendous lawyer and leader within the legal community. She cares deeply about her clients. I have always known her to overcome every obstacle in even the most difficult cases – to achieve justice for her clients. When it comes to personal injury lawyers in Pennsylvania – she is in a very select group of top trial lawyers. Jason Studinski, Attorney at Studinski Law, LLC

In this time of great uncertainty, Munley Law is here for you. If you’ve suffered a serious injury, we are ready to fight on your behalf.