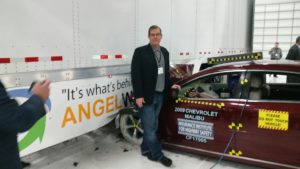 The IIHS crash tested the “Angel Wing” underride guard from Airflow Deflector, Inc. They are designed to prevent passenger vehicles from going underneath the tractor-trailer during a side-impact crash.  Instead, the passenger vehicle’s front bumper will strike the Angel Wing, […]

Truck Accident on I-81 in Wilkes-Barre A truck accident near the Highland Park Boulevard exit in Wilkes-Barre, PA this morning shut down Interstate 81 when one tractor trailer rear-ended another at around 4 a.m. One driver was trapped inside his truck and was taken to the hospital to be treated for injuries.

Truck accident lawyer and former chairman of the American Association for Justice Trucking Litigation Group Dan Munley notes the significance of the time of the crash: “Leading indicators show that at the time of the crash, the truck driver would have been at an increased risk for a fatigue-related accident.” A complete investigation will determine whether fatigue played a role in this case.

The human body operates on a 24-hour cycle, during which we are programmed to need rest at certain times of day. […]