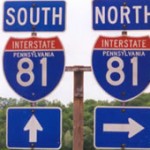 second deadly crash occurred on I-81 in northeastern Pennsylvania this week, this one in the northbound lane near the Wilkes-Barre Township/Mountaintop exit. A sports utility vehicle exiting the highway was unable to negotiate the curb and flipped. A passenger who was ejected from the vehicle died of injuries sustained in the accident. The driver also sustained serious injuries in the crash. A third passenger in the vehicle, the only one wearing a seatbelt at the time of the accident, received only minor injuries.

Each year about 33,000 people are killed in motor vehicle crashes. According to the National Highway Traffic Safety Administration (NHTSA), with 45 to 60% effectiveness, seat belts are the single most effective means of reducing the risk of death in a crash and saved an estimated 12,174 lives in 2012.

The Pennsylvania Department of Transportation (PennDOT) works proactively to reduce the number of traffic-related deaths and injuries on the state’s roadways through the implementation of various education, enforcement, engineering and emergency medical strategies. According to the 2014 Pennsylvania Highway Safety Plan, the state’s long-range highway safety goal aims to reduce the five-year average of total fatalities and total major injuries by 50% between 2010 and 2030. According to plan statistics, 5-year average fatalities 2008-2012 in Pennsylvania were 1,329, while average major injuries were 3,556.

Pennsylvania has nearly 120,000 miles of roads and highways. According to the 2012 Pennsylvania Crash Facts and Statistics Book, there was 124,092 reportable traffic crashes in Pennsylvania in 2012. These crashes claimed the lives of 1310 people and injured another 87,846. On average in Pennsylvania, there were about 340 reportable crashes each day, or about 14 per hour. Each day 4 persons were killed in crashes or about one every 7 hours, and there were 238 persons injured each day, or about 10 injuries every hour.

PennDOT reports that passenger cars are involved in more crashes than all other vehicle types combined. Passenger cars combined with light trucks, vans, and SUVs account for 93% of all vehicles in crashes and 77% of all occupant deaths.

The family of attorneys at Munley Law Personal Injury Attorneys encourages you to drive safely this summer. Whether you are traveling just a few blocks or across the country, always wear your seatbelt and make sure all passengers in your vehicle are buckled up as well. If you have been injured in a car accident, the Pennsylvania personal injury lawyers at Munley Law Personal Injury Attorneys can help. Visit www.munley.com.