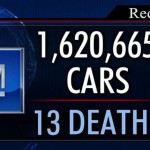 GM CEO Mary Barra announced today that 15 people have been fired for being incompetent or irresponsible in their actions involving fatally flawed ignition switches that are linked to 13 deaths where airbags failed to inflate during car crashes.

This included those in senior management and executive roles and also switch engineer Ray DeGiorgio and development engineer Gary Altman. DeGiorgio, the GM engineer who signed off on a change to the ignition switches that improved their performance, met with investigators last week to talk about his role in the problem which resulted in so many fatal car crashes.

In 2006, approximately two years after cars with the defective switches were launched, DeGiorgio signed off on a change to the switches, according to court documents. Company documents also show that the design change was not accompanied by a change in the part number, making it difficult to track the change.

Barra also said that others were disciplined because they didn’t take action. The firings and discipline came after an internal report commissioned by Barra and conducted by former U.S. attorney Anton Valukas. The report found a pattern of “incompetence and neglect.”

According to an article in last week’s LA Times, David Friedman, acting administrator of the National Highway Transportation Safety Administration (NHTSA), said that GM knew about the safety defect, but did not act to protect Americans until this year.

The ignition switch problem has led to the recalls of 2.6 million GM vehicles and prompted federal fines and several investigations into why it took GM over a decade to issue the recalls.

GM reported last month that it had replaced just 47,000 of the 2.6 million defective ignition switches and also warned of more recalls through the summer as the automaker continues to look for older problems with vehicles that were never addressed.

ABC News reported this week that before the recalls, safety was low in GM hierarchy. According to the news report, GM could have given higher priority to safety when it reorganized under bankruptcy protection in 2009, but instead, the automaker focused slowly on fixing its finances. ABC went on to say that GM’s main competitors, Ford and Chrysler, both have safety directors higher on their charts than GM.

Congress is also investigating whey the NHTSA didn’t pressure GM to recall vehicles with the ignition switch problem sooner. When jostled, the faulty ignition switches can slip into accessory mode, cutting power off to the vehicle, leaving it without power steering and causing airbags to fail to deploy in the event of an accident.

Automotive News reported that there were several instances over the past decade when GM could have recalled all or some of the vehicles with faulty ignitions. Automotive News said that opportunities arose in 2004, 2009, 2012 and 2013, but no action was taken until this year.

If you have been injured in an accident involving a Chevrolet Cobalt or another GM vehicle, call Pennsylvania personal injury lawyer, Marion Munley, at Munley Law Personal Injury Attorneys at 855-866-5529 or visit www.munley.com.